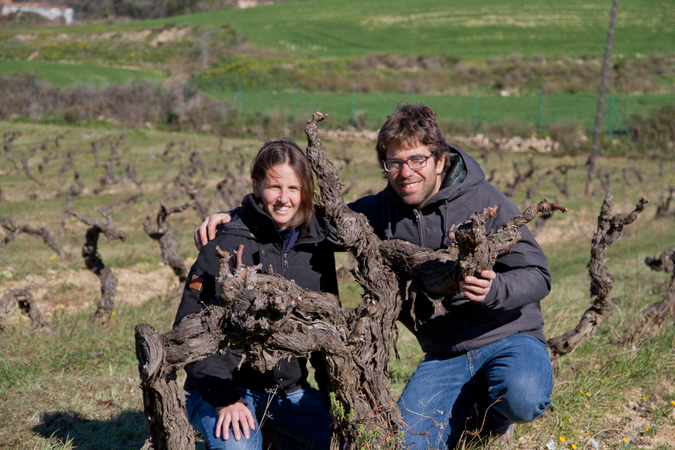 A farmer’s job is administrative, being a dispenser of the “Mysteries of God”
-From The Holy Earth by L.H. Bailey

Dasca Vives is a family farm located just south of Barcelona and 20 kilometers from the Mediterranean Sea in an area of Catalonia known as the Alt Camp. Josep Dasca and Alba Vives a forestry engineer and agricultural engineer/enologist, have converted the family land where they were raised completely to biodynamic farming principles. Their philosophy is lead by a necessity and responsibility to heal the land by “following the rhythms of the biodynamic calendar, with the concept of nature as the whole macro-cosmos and applying different preparations based on minerals, plants and animals in order to revitalize the soil, the plants and the people it feeds”.

For decades these practices have made Dasca Vives popular with locals who seek their prized organic olive oils, almonds, hazelnuts, carob and of course vino directly from the farm and winery. Now Wine for the World is proud to offer the rare, beautiful and truly artisanal Dasca Vives wines to the US.

The vineyards of Dasca Vives are home to vines as old as 65 years and produce truly magnificent wines from native varietals such as Macabeu, pre-phylloxera Vinyater, and a local strand of Tempranillo called Ull de Llebre, to name a few. International varieties such as Garnacha and Cabernet Sauvignon are also grown and blended into varying styles of spicy reds and a playful sparkling Petillant Naturel (known as Ancestral Spain) is made from the local Cartoixà grape.

The wines of Dasca Vives are treated with the same respect in the winery as in the vineyards, allowed to ferment naturally with the yeasts on the skins, sparing use of sulfites to maintain freshness, and malolactic fermentation is allowed to occur when the temperature in the cellar dictates.  Some of their wines have no added sulfites.

There is minimal usage of chestnut wood barrels as it is traditional to the area as well as oak. The wines are naturally vegan as no clarification agents are used, only a cellulose filter. Even the corks are sourced from local cork tree farms!