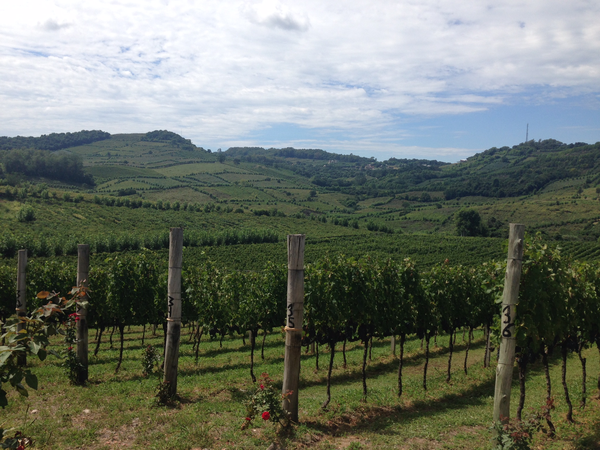 You may have heard of Brazilian soccer and beaches, but chances are you may be surprised to learn that Brazil is the third largest producer of wine in Latin America. In fact, it produces 50% more wine than New Zealand.  And it makes some of the best sparkling wine in all of Latin America. Just ask Jancis Robinson or Steven Spurrier, or other sommeliers who have had the chance to visit. Why don’t you find more of it in the US? Until very recently, virtually all of the wine had been consumed domestically.

Brazil is an enormous country. Its main wine region is located in the southern most state in the country, Rio Grande do Sul. It shares the same latitude as the wine regions of Argentina, Chile, and Uruguay, and is part of the global “wine-growing zone” of 30-50 degrees latitude north and south.  Some of the finest wines in the country are found in what is now Brazil’s first official appellation, Vale dos Vinhedos (“Valley of Wineries”), located in the southern state of Rio Grande do Sul.  The first vines in Brazil were planed by the Portuguese in 1532, but it was not until migrants from Italy’s northeast came to Rio Grande do Sul in the 19th century that production really started taking foot. Chardonnay is the Brazil’s most planted white grape, which is widely used in the production of both sparkling and still wine. And Braziilian sparkling wines have caught the eye of many wine critics. According to Steven Spurrier (who organized the Paris Tasting of 1976 that put California on the map), “Brazil makes the best sparkling wine in the Southern Hemisphere.”

Of the Brazilian sparkling producers, we are extremely proud to introduce the wines of the Geisse family, widely regarded in Brazil and throughout Europe as the country's best producer of sparkling.

Recruited from Chile to launch Moet & Chandon’s Brazilian operation once they discovered the potential of sparkling wine in Brazil, Mario Geisse (of Chile’s acclaimed Casa Silva) brought his family to Pinto Bandeira 40 years ago. He was not thrilled working in mass production methods, and desired to return to ultra-high-quality winemaking. All of Geisse wines are made in the same process as wines from Champagne ("method traditionelle"). Mario's diligent focus on understanding the terroir through many micro-terroir experiments, extraordinary quality control, skill, and standards of excellence turned him into the pioneer for the Brazilian wine industry.

So much so, that even Jancis Robinson, one of the world’s toughest wine critics noticed. Jancis Robinson included Cave Geisse wines as one of 15 representing the future of the wine world. In 2014, Wine Enthusiast nominated the Geisse Winery as one of four Wineries of the Year (New World). Now, the demand for Geisse’s wines exceed three times the level of production. Somehow, we convinced them to part with some of their production in order showcase how truly remarkable Brazilian wine can be. Geisse wines exclusively produce sparkling wine.

We selected several wines from their extensive collection, from your everyday sparkling wines to dessert wines to wine for a special occasion. Click on a wine below to learn more.